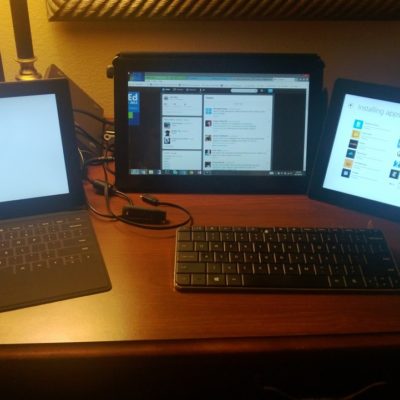 My review of the Surface RT.  (picture is of the RT, Samsung Slate, and Pro on my desk at the hotel)

Lets cover the Surface RT first in this post:

The Surface RT is Microsofts answer to low power, long life ARM based devices.  This was MS’s first venture into ARM territory other than phones.   There is a good bit of confusion as to WHAT this device can do, and what it cant.  It has a desktop, but you cant install desktop apps.  It has an App Store, but some apps you like may not be in it.

This is all due to the Nvidia Tegra ARM CPU, and not the traditional x86 CPU in most PCs.  This means only programs specifically written or ported to the CPU and OS can be used.   I thought this would be a big limitation in usefulness.  But holy crap was I wrong.

Desktop:  yes its there.   No its not that useful.  But in a strange way, its very useful.   The desktop is misleading to so many because you cant install desktop apps.   What you can do though is manage the system at a file level, use the legacy control panel, low level config utilities from the desktop including regedit for hacking in the registry.  You can manage the disk use, view event logs, and do deep system level work if you want.

There is nothing even close on the apple side of the house to that functionality and ability to customize your tablet if you so choose.

That and Office are the only reasons to even go in the desktop.  Even office is going to be rev’d to a full “Modern” interface soon.

App Store: Less apps than Apple? yes.   Was I able to find the apps that work for what I needed? Yes easily.    The App ecosystem is growing, slowly, but it already has an app for most things people would use in a business setting and many many more for home use.  It is still the primary weak point in the MS offering

Browser:  Yes it supports flash, the feature/function subset is constantly being improved (via flash updates).  Some video feeds wont play but many will.   Another check in the MS box.

Battery:  I used the tablet all day, every day at TechEd.  Used it for Twitter (TweetDeck in the browser and other apps), Skype, Lync, note taking in One Note, web browsing, calendars and session schedules, etc…   And at the end of the day (using it from 8am – 6pm) I still had ~40% battery left.  That is SOLID battery life.

Weight/Feel:  Having used a heavy Samsung Slate, and the Surface Pro, the RT feels light, thin, and solid.  The Mag case is a true pleasure to have in the hand.   I also have an iPad, and I find the RT to be much better in the hand than my ipad.  But due to its 16:9 ratio it does feel a bit heavier when holding it one hand.

I did find holding it in portrait mode worked AWESOME for note taking though and reading through documents/presentations between sessions.

Screen:  It’s good, its no retina.  1366×768 res isn’t blowing anyone’s hair back, but it works quite well.  I assume the next version will up the resolution.  Color and contrast are very good on it though.  The Surface Pro Display at 1920×1080 is in another class though.

Keyboard Covers: The RT came with the Touch Cover, which is the capacitive fabric feel keyboard.  To me its good, and a nice feature add-on for a cover, but was not good for heavy duty typing.   it is very thin, very light and easy to treat as any cover, but with the perk of being a keyboard and a track pad if you needed.

The track pad is a very nice feature for those who want to use the RT and Citrix or Remote Desktop into corporate environments.  No need for a mouse, or anything else to work with legacy UI apps via remote connections.

I bought the upgrade Type cover, which has physical keys.  That Keyboard is awesome, I type as fast on it as I do on my home keyboard.  But it is 1mm thicker (which you can feel in your hand easily) and a bit heavier.  It also doesn’t feel as good when just being used as a cover that you flip behind.     I am keeping the type cover on the already beefy Pro because the RT just seems to be better with the touch cover for the workloads it sees.

Coming in 8.1: At TechEd there were announcements about improvements with Windows 8.  One of them was around the Windows 8 RT changes to allow the OS to be managed via Domain, and support more enterprise control.  This is meaningless for home users, but this will usher in a wave of enterprise use.  Now companies can bring ARM devices into their corporate policies/app side loading/ configuration reigns like any other tablet.   Expect to hear “Windows RT in the enterprise” a lot in the coming months.  This is a very key way MS is going to try and muscle out the iPad’s from those environments.  IT departments loathe managing individual iPads for executives right now, this makes managing portable tablets easy.

Things I would change:

I love this tablet.   I went in questioning its usefulness, and left wondering why anyone would be angry at its existence.   It is lighter than an iPad, thinner than an iPad, is real good at content creation and retrieval, offers more customization and tweaking possibilities, comes with real MS office – not the asstastic Keynote/Numbers/crap apps, and is comparable in price if not cheaper now (the Touch Keyboard is included now with the Surface RT).