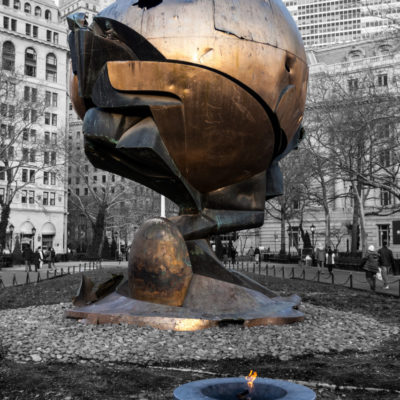 This is a pic I took in NYC, battery park in 2008 of the WTC Statue. I was looking through some photos and wanted to do something with this one. This is the statue that was in the middle of the World Trade Center on 9/11. It is called The Sphere, and was Rebuilt from the rubble and relocated to Battery park for now (still there, supposed to be moved sometime in 2013).

I wanted to do strip color from everything but the monument and the fire pit. I did all the desaturation by hand, over a couple hours. But I really like the results.

The contrast of the blue rock and bronze against the b&w background is interesting to me. I also left the flag in color in the background.