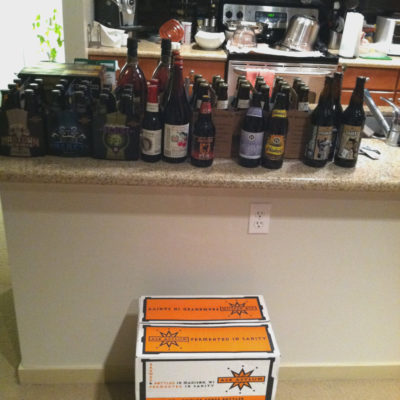 From the above picture you can see the bootie I was hauling.  That is most of what I brought, there are multiple 6 packs for most of them in the picture, and 4 packs of the Sprecher, and both Hinterlands (Octoberfest, and Winterland) that I didn’t put up there.    And the two cases of New Glarus and Ale Asylum are : Black Top (GABF winner), and Contorter Porter.

In there are two bottles of the new Thumbprint series from New Glarus (Chocholate Abbey), and 3 Belgian Red’s for bartering around town. There are also some Southern Tier beers there that you cant get in CO, and are some of my favorites (Oat, Mokah, and Imperial Black)

Oh and 2 big bottles of Korbel (wich cost ~ 2/3 the cost in the big bottle in WI, that the small one can be found in CO for if you are lucky enough to find it), so instead of relying on some pretty shaky and random Old Fasioned’s around Denver, we can just make the proper ones ourselves.