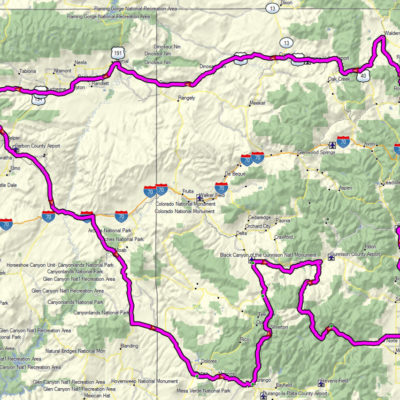 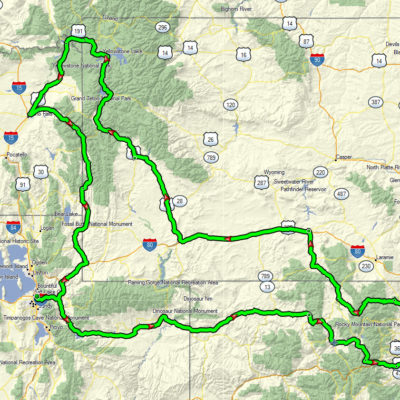 So… I am starting to plan what I want to do for exploring the Rockies this year.  The trip probably wont be until late June or sometime in July just due to wanting the roads to be snow free (as much as possible).

After the last trip, I have all the gear I need, except maybe some new tires for the bike.  The trip last Sept was the single most liberating, exhilarating, and eye opening adventure I have been on.  Not sure anything will rival that just due to everything being so new, and unexpected.   But there is a ton of area to cover and places to see 🙂

The first map takes me out to SLC through RMNP, and some roads I was on last Sept, but many I wasn’t.  Then down to Moab, and then back through Durango, and up some of the roads I wasn’t able to hit on my last trip.  Also a swing by the Sand Dunes, and stops in my favorite town in Colorado – Creede.

The second, hits up Yellow stone (gotta see it before it blows up on Dec 12 2012 and all :p), meanders into Montana, Idaho, and then down to SLC, and back to Denver.  I’ve always wanted to see Yellow Stone national park, and parts of the mountain ranges in Idaho.    This trip would be shorter than the other just due to much of it being a straight shot in highways.

Both are routes I really want to take, I doubt I can or would want to do both in one summer… but who knows.  One of these routes could be done in the car with Kate as well.  While not as exciting as being on a bike, it would be nice to take Kate out for an adventure around the Rockies.

We are already planning to recreate much of my Sept route via car with her as there are also some areas I want to explore that the bike couldn’t go on that route.