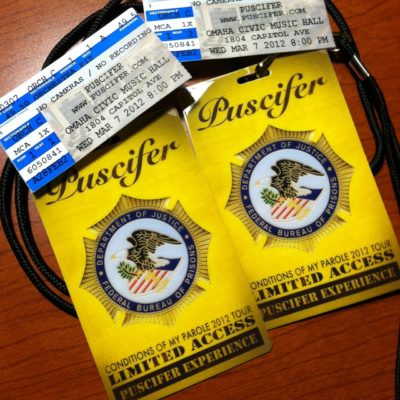 Kate and I caught Puscifer in Omaha with VIP access, private wine tasting of Maynard’s wines, and got some nice swag.   Swag included two VIP pass tags, two canvas shoulder bags which are quite nice, two signed posters from the band, and some other odds and ends.

We got to sit through the sound check before the wine tasting, where they did a cover of Fleetwood Mac’s “Chains”, and did the Humbling River in a rendition that was stunning.

Our seats were near the side of the stage in the front row which was great as we were only 15 ft from everyone, but we were just next to a big bass speaker tower… some of the songs rattled my lungs so bad I could barely breath.   During the song Man Overboard, the mind rattle’n bass was welcome… best that song has ever sounded!

The concert as evolved a bit since Denver it seems, and wasn’t exactly the same, but carried the same message, and same power.

Awesome trip, great concert, and hung out with some hard core and solid Puscifer/Tool/Caduceus/APC fans in the wine tastings.

Sorry no other pics from the day – the VIP’s were patted down and we were told to have our phones turned off (they checked) for the duration.  A small price to pay for awesomeness.

I also scored two nice Puscifer shirts…. first concert shirts I have bought in some time, but these were worth it 🙂