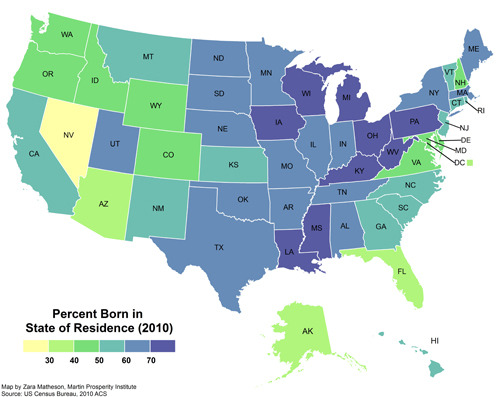 The Geography of Stuck

“Nearly six in ten Americans live in the state where they were born, according to the U.S. Census bureau. But there is considerable variation from state to state, as the map (above) by Zara Matheson of the Martin Prosperity Institute shows. More than three quarters of the people in Louisiana (78.9 percent), Michigan (76.6 percent) and Ohio (75.1 percent) were born there, as opposed to just 24.3 percent of Nevadans, 35.2 percent of Floridians, 37.2 percent of the residents of Washington, D.C., and 37.7 percent of Arizonans. A high level of home-grown residents is also indicative of a lack of inflow of new people.”

I am one of the few native Coloradoans.