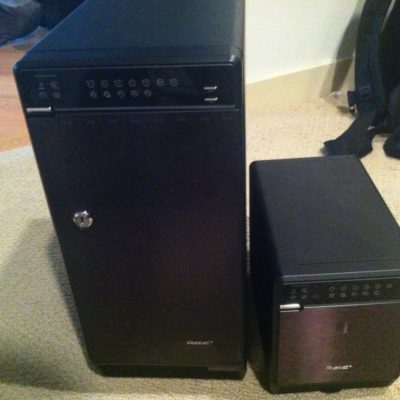 Time for a “small” upgrade.  The small box on the right is what I used to back up everything we have (then stored off-site).  It holds 4x 2TB disk and has a built in hardware RAID controller (USB 2.0/eSATA connectivity).   The box is great, but 8TB was getting pretty tight for monthly backups.   So enter the big box.

This new RAID enclosure has 8 bays, and can hold 8x 3TB disk = 24TB.  That should last a while.   Still just populated with 4x 2TB for now, but now I can add disk as I need more backup space.

It’s also sporting USB 3.0 and SATA III connectivity which helps move the data that much faster.

Thanks CraigsList buyers for making this upgrade possible 😉  Speaking of which, the small box is going on CL soon.